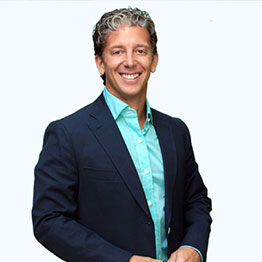 In his free time, Rob Kominiarek, D.O., likes to fly. And exercise.

But what’s remarkable is the fact that Dr. Kominiarek has any free time at all—and not just because he runs his own functional medicine practice, makes regular TV appearances, lectures, has several bestselling books, is a dedicated father, and also enjoys cycling, swimming, triathlons, soccer, tennis, skiing, motorcycles, and automobile racing.

No, what’s remarkable is that Dr. Kominiarek says just a few years ago, he “felt like a hamster on a treadmill,” seeing more and more patients every day in order to keep his family practice afloat in the face of rapidly decreasing managed-care reimbursements. Worse, he says, he did not feel like he was making a difference for patients.

“I had a really successful practice,” he says. “What happened was, the managed care companies that came in to manage state Medicaid in Ohio met with me, and they wanted to start negotiating their fees. I was getting less every year; they kept ratcheting it down, and they got you to stop doing procedures by essentially squeezing you out—and that’s what happened.”

At the same time, everything he wanted to do for patients was being scrutinized. “I was so disillusioned with health care, I hated going to work. I hated that some doctor in India had control over my patients in Ohio because of some managed care system, and I had to talk to this person to get permission to use something for my patients. It was an incredibly frustrating system to work under, and the joy was rapidly leaving it, and because of the decreasing reimbursement I had to keep seeing more patients. It was like being on a treadmill, and I was just miserable. I hated it. And then I never really felt that I was doing any good.”

Fortunately, Dr. Kominiarek had already developed an alternative. It all began, oddly enough, when he witnessed a motorcycle accident. “Back in the mid 90s I was opening up an urgent care for a hospital system in Ohio. I saw a car pull out of the parking lot and slam right into a motorcycle. I ran over with a colleague and helped tend to this kid, in his early 20s, and watched them put him on a stretcher. Like six months later he showed up, complaining of feeling fatigued, just not feeling well, gaining fat, and he looked like his muscles were shrinking. I didn’t know it at the time, but he had lost a testicle in the accident, and then later they had to remove the other one. I called his urologist and he said, ‘Oh yeah, he’s going to need testosterone,’ and hung up. I called his endocrinologist, and he said, ‘Yeah, he’s going to need testosterone.’ That was it. So I gave the kid a shot, and he felt better. Then he felt worse. Then he felt better. Then he felt worse. I wondered how anyone could live this way—and I realized there was no management of his hormone levels.”

But, says Dr. Kominiarek, in his residency, “we spent like three months on female hormones, and like one paragraph in the book on male hormones.” And that’s what got him into hormones. He started researching hormone replacement therapy, which was not as easy then, in the mid-90s, as it became with the growth of the internet. But he studied and became familiar with different protocols and delivery methods.

Meanwhile, around 2009 the recession hit, and the biggest employer in his area of Ohio, as well as the source of half his patients—GMC Truck and Bus—went under. “Overnight, I became a Medicare/Medicaid clinic,” says Dr. Kominiarek. “GMC had been paying for everything for their employees, but when GMC went out that stopped.”

Because of the effort he had put in to self-education, Dr. Kominiarek was already moving in another direction, but he still had a tough time making the leap. He had developed an exercise program and books that he sold on Amazon, and he began running a cash-based practice on the side with age management protocols. “I was already doing these things for myself and my athlete friends, and I realized I could turn this into a business model and start delivering age management medicine,” he says.

“At the same time I was heavy into triathlons, heavy into health, I had my books out, and I was kind of blending both worlds; the insurance world was keeping my age management medicine / health medicine practice moving, but eventually that started to flounder and I realized if I wanted to succeed, I was going to have to make the jump and just go for it. And the worst thing that would happen is I was just going to have to go back. But I really did not want to, because the only time I felt I was doing any good, was for the patients that I was doing hormones with, and helping them compete in triathlons or helping them reclaim their health—that brought me joy because it was like I was really making a difference.”

“When I lecture,” says Dr. Kominiarek, “a lot of docs come up to ask, ‘How did you do that? What did you do?’ I’ve done some scary things in my life, but at that moment in 2009 it was the scariest thing I had ever done. When I first got out of med school I was living out of my car, I had a duffle bag and two textbooks, and I didn’t care if I ate or not. But now I had a family to take care of, with two kids.”

But Dr. Kominiarek took the leap and sold his practice. “It’s a scary thing to go from an insurance based practice to accepting only cash, and it took a couple of years to get it up and running to the point where it was stable. When I sold my practice, I started doing research, finding out who’s running clinics and how are they doing it, and from a business standpoint how they make it work. I was flying around the U.S., visiting with doctors, asking how do you do this, how do you make this model work?  What’s a model that I could use and that would keep a steady revenue stream coming in so you can keep your doors open? There’s plenty of doctors who try to go out on their own in a sense and stop taking insurance and aren’t successful. Then there are some who have a blended model, take cash from their hormone patients and then take insurance for their surgeries.”

Dr. Kominiarek says his business model came from an unusual source. “How I came up with my business model, was from selling books on Amazon, believe it or not, strange as it may sound. I had books out on Amazon, I had an exercise program, books, nutrition manual. I took the business model off the way we had it set up on the internet, and applied it to a medical practice. People could join the practice like a country club and pay monthly, and then people could also pay annually, make a lump sum payment that came with a discount. Then we added more products—branched out with these other therapies that helped with the aging process, and moved into different types of therapies.”

“Now instead of seeing 60 people a day, I see two,” he says. “It’s quiet, it’s peaceful. My focus is 100% on them and not on something else, not on dealing with insurance companies. I had a staff of four billers—that’s all they did, all day long, deal with billing issues. Now we don’t have any of that. I felt like a hamster on a treadmill, like I was working for everybody but myself, and the only way to control overhead was to lay people off, which I hate doing. I really feel bad for primary care doctors; it’s just not a good system.”

About ten years ago, Dr. Kominiarek became familiar with AMMG, some of whose faculty he already knew as his “hormone friends.” He eventually began lecturing himself, and is now a member of the Conference Planning Committee. HRT is, of course, a major area of expertise for him, but he has more recently been studying and lecturing about peptides. “Hormones are crucial,” he says, “but regenerative therapies are even more so. Peptides will be as big if not bigger than hormone therapy.” And the latest of these regenerative therapies involve exosomes, which he explains are extra-cellular vesicles that move ahead of the stem cells. “They were  thought to be debris but now we have discovered they are actually moving ahead of and guiding the stem cells. They are harvested from placenta.” He cites the case of a boy in Florida whose legs were paralyzed, was treated with intra-fecal exosomes, and is now able to move his legs. “We’ve had three patients cancel surgeries because of exosome treatments,” Dr. Kominiarek says.

Dr. Kominiarek continues to study new and emerging therapies, and also feels strongly that as this field continues to grow, it must be vigilant. “At the last AMMG conference I wanted to focus on overzealous use of aromatase inhibitors, and how bad they can be for the male physiology; guys suffer osteoporosis.” Hormone replacement therapy in men, he says, is “still in its infancy.” And, he warns, “There’s a segment of HRT that is purely business driven, and by taking a cookie cutter approach, is doing harm.”

“There are plenty of doctors like me, now, who are fed up with primary care, who see age management medicine as a way out, which it is,” Dr. Kominiarek says. “But they’re coming out and learning bad protocols, off the internet, and business people are trying to take advantage. Unfortunately there’s always going to be an element like that, that slides in.”

“In age management medicine we’re still seen as renegades,” he says. “As a whole, as an ‘industry’ if we don’t police ourselves, somebody else is going to do it.”

Return to the June e-Journal
0