Aug. 20, 2018 (Science News) — In a large brain imaging study published in the Journal of Alzheimer’s Disease, a team of neuroscientists and psychiatrists evaluated over 60,000 brain scans of 31,227 individuals (9 months – 105 years old) to investigate factors that accelerate brain aging. 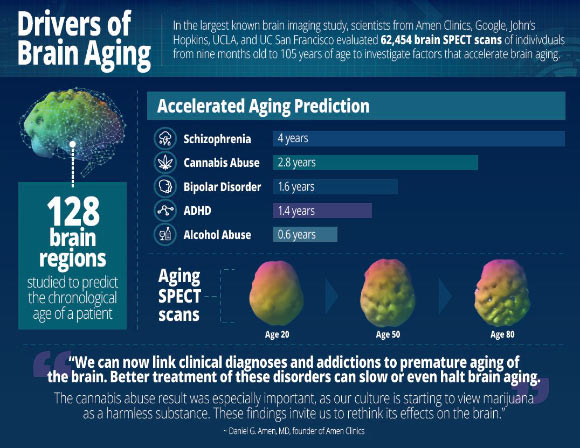 “Based on one of the largest brain imaging studies ever done, we can now track common disorders and behaviors that prematurely age the brain,” said lead author Dr. Daniel Amen, a psychiatrist and founder of Amen Clinics.

“Better treatment of these disorders can slow or even halt the process of brain aging.”

“This is one of the first population-based imaging studies, and these large studies are essential to answer how to maintain brain structure and function during aging,” added Professor George Perry, chief scientist at the Brain Health Consortium from the University of Texas at San Antonio, who was not involved in the study.

“The effect of modifiable and non-modifiable factors of brain aging will further guide advice to maintain cognitive function.”

They examined a total of 62,454 scans from patients who had many different psychiatric disorders, including bipolar disorder, schizophrenia and attention deficit hyperactivity disorder.

The team studied 128 brain regions to predict the chronological age of the patient.

“Older age predicted from the scan compared to the actual chronological age was interpreted as accelerated aging,” the study authors explained.

“The cannabis abuse finding was especially important, as our culture is starting to see marijuana as an innocuous substance. This study should give us pause about it,” Dr. Amen said.

Interestingly, the scientists did not observe accelerated aging in depression and aging, which they hypothesize may be due to different types of brain patterns for these disorders.

“This study represents an important step forward in our understanding of how the brain operates throughout the lifespan,” said co-author Sachit Egan, of Google Inc.

“The results indicate that we can predict an individual’s age based on patterns of cerebral blood flow.”

“Additionally, groundwork has been laid to further explore how common psychiatric disorders can influence healthy patterns of cerebral blood flow.”