John E. Adams, Cenegenics LLC Co-Founder, former CEO, and current Chairman of the Board of BestLife,  passed away unexpectedly on October 20, 2022. He and Dr. Alan Mintz co-founded Cenegenics in 1997. 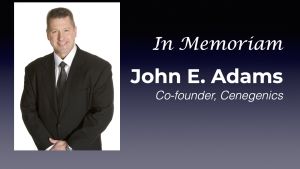 “John inspired all with his passion for family, both blood and chosen,” said Kristy Berry, Cenegenics Chief Executive Officer. “His warm nature and welcoming spirit extended his impact to the whole BestLife family. He was a caring, trusted friend and advisor. John made a positive impact on every person he encountered, encouraging them to be the best of themselves every day.”

A resident of Chicago, IL and Las Vegas, NV, John was born on July 7, 1963 in Buffalo Grove, IL. He is survived by his best friend and loving wife of 36 years, Janice (nee Rejman); his cherished children, Charles (fiancé Dania Avila-Cardona) and Jacqueline Adams; his adored mother, Alfhild “Alfie” Adams of Wake Forest, NC; his dear siblings, Paul (Lorie) Adams of Chicago and Susan Adams of Wake Forest, NC; his special nieces and nephew, Chelsea Adams, Robert Adams and Jessica Powers; as well as chosen extended family. He was preceded in death by his father, Paul B. Adams.

John was Founder of YPO Gold – Las Vegas Chapter and former Honorary Commander at Creech Air Force Base. In addition to appointment on the Presidents Council at the University of Illinois Chicago, John also served on the Dean’s Business Advisory Council and Executive Committee of the College of Business Administration. In recognition and celebration of unwavering support of the Juvenile Diabetes Research Foundation and the Las Vegas Community, the City of Las Vegas decreed April 26 John E. Adams Day. He was also inducted into the University of Notre Dame Badin Guild.

For those who would like to leave a lasting tribute to John’s life, memorial donations may be directed to the John E. Adams Memorial Scholarship, c/o University of Illinois Foundation, P.O. Box 734500, Chicago, IL 60673-4500 or at give.uic.edu, please indicate John E. Adams Memorial Scholarship under the “Other” designation field. For assistance, please contact 312-413-4898.

On October 3, 2022 Greg Stavish passed away at 70 years old. Greg Stavish was at the very first AMMG conference, and also at nearly every one up until his retirement in 2016, when his son Michael took over the family business. Greg Stavish started Insta-Tapes in 1971, and later rebranded to DigiVision in 2006. As a hobbyist and enthusiast audiologist, and a lifelong entrepreneur, Greg invented a way to work with small events to record their sessions, bringing even more benefit to the members that those groups already provide. You probably knew him best as the “Tapes Guy”. When you wanted the conference tapes you went to Greg.

Greg loved his work. He would get excited about advances in technology. The idea of the Internet never occurred to Greg in 1971, but he sure bought in when it came. He was also one of the earliest adopters of video media over audio. But Greg never forgot where we once were. He would fondly reminisce about the old days of tapes and reels, noting that in my short time at the company we’d changed the product five times to keep up, but tapes endured up until 2000. His mind was always churning. He was always looking for ways to improve the product, reduce costs, and add value. He filled notebooks every month with his ideas, and some of them proved the test of time, as they are still implemented at DigiVision today. He never rested. I imagine even his final thoughts were partly what he could still do, for his business and his customers. 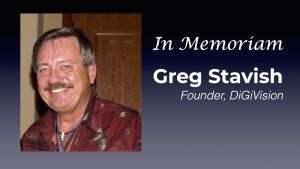 He loved his customers even more than his work. So many conference attendees knew him so well. They remembered Greg. They remembered that he would take care of them, but they also remembered his big heart and gregarious attitude. He genuinely liked everybody. Even today, I still get asked, “How’s your dad,” and when I would bring them up later, he’d warmly reflect on them. He loved the purchasers and the conference organizers. He was especially good friends with Rick Merner and Greg Fillmore, having already worked together for nearly a decade before AMMG. He always wanted the best for the group; anything for the success of the group and the conference.

My heart is so heavy, and I miss my dad more than anything, but knowing his life was big and put so much positivity into the world eases the sorrow. I know you will miss him too.

Donations can be made to Phil’s Kids charity via the link listed below, just copy and paste.
https://philskids.enthuse.com/cf/in-memory-of-gregory-p-stavish

Return to the October/November e-Journal