June 3, 2020 (ScienceMag.org) – In January, one of the first publications on those sickened by the novel coronavirus in Wuhan, China, reported that three out of every four hospitalized patients were male. Data from around the world have since confirmed that men face a greater risk of severe illness and death from COVID-19 than women and that children are largely spared. Now, scientists investigating how the virus does its deadly work have zeroed in on a possible reason: Androgens—male hormones such as testosterone—appear to boost the virus’ ability to get inside cells.

A constellation of emerging data supports this idea, including COVID-19 outcomes in men with prostate cancer and lab studies of how androgens regulate key genes. And preliminary observations from Spain suggest that a disproportionate number of men with male pattern baldness—which is linked to a powerful androgen—end up in hospitals with COVID-19. Researchers are rushing to test already approved drugs that block androgens’ effects, deploying them early in infection in hopes of slowing the virus and buying time for the immune system to beat it back.

“Everybody is chasing a link between androgens … and the outcome of COVID-19,” says Howard Soule, executive vice president at the Prostate Cancer Foundation, who on 13 May ran a Zoom call presenting the newest research that drew 600 scientists and physicians. A second call scheduled for today will discuss incipient clinical trials.

Epidemiological data from around the world have confirmed the early reports of male vulnerability. In Lombardy in Italy, for example, men comprised 82% of 1591 patients admitted to intensive care units (ICUs) from 20 February to 18 March, according to a JAMA paper. And male mortality exceeded that of women in every adult age group in another JAMA study of 5700 New York City patients hospitalized with COVID-19.

Now, researchers are on the trail of a mechanism for this male bias—an effort led by prostate cancer researchers, who have a deep acquaintance with androgens.

Christina Jamieson of the University of California (UC), San Diego, who has developed organoids to study prostate cancer, recalls that she was in a Zoom meeting honing ideas on how to link her research to COVID-19 when her sister, also a UC San Diego scientist, sent her a one-word text. It read: “TMPRSS2.”

It was 16 April, and within minutes Jamieson had found the publication that prompted the text: a Cell paper by Markus Hoffmann of the Leibniz Institute for Primate Research and colleagues. The paper sent a lightning bolt through the prostate research community, because it showed that infection with SARS-CoV-2, the virus that causes COVID-19, relies in part on TMPRSS2, a membrane-bound enzyme. The enzyme cleaves the “spike” protein on the coronavirus’ surface, allowing the virus to fuse with the host cell’s membrane and get inside the cell.

Jamieson and other prostate cancer researchers were familiar with the enzyme, because in about half of all prostate cancers, a TMPRSS2 mutation revs up an oncogene that kicks cell growth into overdrive. In the prostate, TMPRSS2 is produced when male hormones bind to the androgen receptor. “Doing research, it’s like you’re trying to throw an anchor into the vast ocean of possibilities,” Jamieson says. The discovery that TMPRSS2 helps the virus enter cells “felt like the anchor hit ground.”

Researchers haven’t established that androgens control TMPRSS2 in the lung—ground zero for SARS-CoV-2 infection—as they do in the prostate; studies in lung tissue and cells from mice and humans come to conflicting conclusions. But after the Cell paper was published, Andrea Alimonti, head of molecular oncology at Università della Svizzera italiana, strengthened the androgen link by looking at data on more than 42,000 men with prostate cancer in Veneto in Italy. He and colleagues found that patients on androgen-deprivation therapy (ADT)—drugs that slash levels of testosterone—were only one-quarter as likely to contract COVID-19 as men with prostate cancer not on ADT, they reported in the Annals of Oncology (see table, below). Men on ADT were also less likely to be hospitalized and to die, although numbers were small.

In one Italian study, men with prostate cancer who received drugs that suppress androgens were much less likely to be infected with SARS-CoV-2. 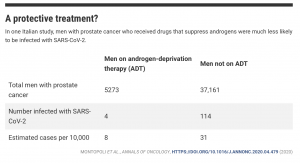 Another retrospective study, still unpublished, controlled for age and other medical conditions and got similar results: Of 58 patients with prostate cancer who contracted the coronavirus, the 22 taking ADT were significantly less likely to be hospitalized and to need supplemental oxygen, says William Oh, a prostate cancer physician-scientist at the Icahn School of Medicine at Mount Sinai. “Our conclusion supports the hypotheses that androgen signaling might increase the risk of severe outcomes from COVID-19 and that androgen deprivation may limit those severe outcomes,” Oh says.

More circumstantial evidence comes from stem cell biologist Faranak Fattahi, of UC San Francisco. Her team found a strong link between a measure of active androgens in the blood and the severity of COVID-19 disease in data from several hundred male patients in the UK Biobank; they did not find this effect in women.

Such evidence is already inspiring possible therapies. Matthew Rettig, an oncologist who directs prostate cancer research at UC Los Angeles, is leading a double-blind, randomized, placebo-controlled trial of the androgen-suppressing drug degarelix in 200 veterans hospitalized with COVID-19 in Los Angeles, Seattle, and New York City. Patients in the active arm will receive a single injection that virtually zeroes out testosterone levels within 3 days. That reduces expression of the TMPRSS2 gene, at least in the prostate, to almost nil. Side effects include hot flashes and breast growth and “are equivalent to surgical castration,” Rettig says.

But whereas in prostate cancer, the injections are given month after month, “This study only involves a one-time dosage. It’s temporary,” Rettig says. He hopes to learn in 4 to 5 months whether the treatment helps keep patients off ventilators and reduces mortality.

Several other antiandrogen trials are in the offing in the United States and Europe. Prostate cancer researcher Catherine Marshall of Johns Hopkins University is preparing a trial of bicalutamide, an older, inexpensive androgen receptor blocker, in 20 patients hospitalized within 3 days after they tested positive for COVID-19. Her group will compare outcomes with patients who don’t receive the drug. “We think that if this works it’s going to work by decreasing the viral load in patients,” Marshall says. “That’s why we are doing it earlier in people’s course of disease.”

Women are being included in the trial, she adds, because they have androgens, although at lower levels than men, and because estrogens have been shown to help heal acute lung injury. Bicalutamide raises estrogen levels as well as suppressing androgen activity. Marshall says of the emerging wave of trials: “All these trial ideas have been team science at its best and probably at its fastest.”

Adding to the promise of antiandrogens is lab-based evidence from Fattahi’s study. Her team screened Food and Drug Administration (FDA)-approved drugs in heart cells in the lab to see which ones reduced levels of the essential SARS-CoV-2 receptor, angiotensin-converting enzyme 2 (ACE2). Key hits included finasteride and dutasteride, drugs that block the conversion of testosterone to DHT, according to a 15 May preprint. Finasteride is FDA-approved to treat male pattern baldness and dutasteride for prostate enlargement. Dutasteride also reduced ACE2 levels in healthy human lung alveolar cells.

Although researchers pursuing the androgen link caution that their hypothesis remains just that until it is borne out in lab and clinical studies, they’re optimistic. “When all evidence points to the same thing it’s very satisfying,” Fattahi says.

© 2020 American Association for the Advancement of Science. All rights Reserved
Return to the September e-Journal
0